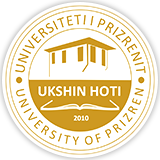 University of Prizren is established on 09.10.2009 with the decision number 01/87 of the government of the Republic of Kosovo and after an intensive preparation work with international consultants started officially in 2010. Tradition of higher education in Prizren starts earlier with its Higher Pedagogical school in 1962 which University of Prizren inherited. HPS got independent from the University of Prishtina which is the oldest HE institution. HPS in Prizren has been transformed to Faculty of Education in Prizren under the umbrella of the University of Prishtina. Since 2010/2011 Faculty of Education which until that time was under UP got transferred to UPZ. Specifics of the Faculty is that studies are offered also in community languages (Bosnian, Turkish).